Kids, in the spring of 2014 your father and I did something crazy.

We sold everything we owned except what we could pack into an 8X5 UHaul trailer and proceeded to drive nearly 400 miles to a place your father had only seen once. Hopefully most of what you will remember from the two weeks that followed will be mostly the pleasant parts of playing in dirt, exploring the fields, and sharing a giant tent like an epic sleepover every single night. Hopefully all the tough parts will be obscured by the magic that is inextricably linked to childhood. Anyway, here’s a recount of what it was like to move here for when you’re old enough to be reading blogs on the internet for fun. So, pretty old.

The last thing anyone wants to do after driving for nearly two full days with a carload of cranky kids is to set up a campsite and start a two week camping trip with no hot water or toilet. Fortunately the well went in and the pump was installed just a few days before we arrived, so there was no shortage of running water. Remember when I said I wanted to do things the hard way? Pshhh. That was just crazy talk. This “hard way” stuff is no joke. Here’s how a typical day went down. 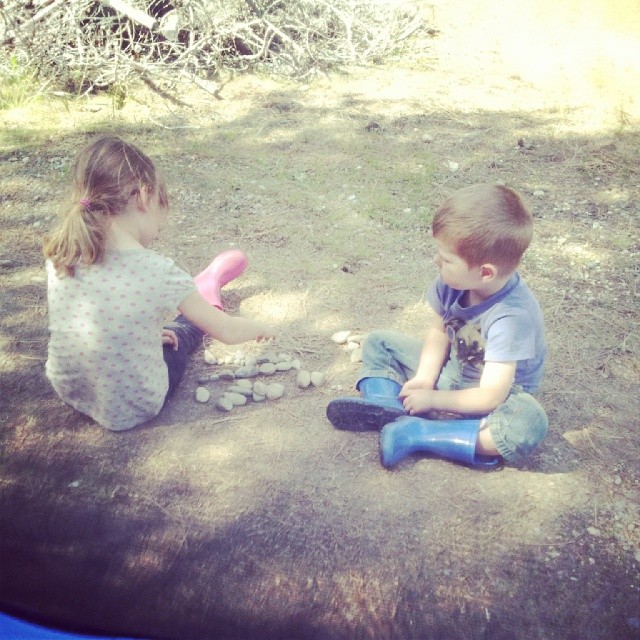 We would all be up with the birds around five and spend the next hour or so tossing and turning to catch any last remnants of sleep before someone had to go to the bathroom (and by bathroom, I don’t mean bathroom). The tent was large and comfortable, but uninhabitable between the hours of 9am and 8pm since it sat in the direct sun and proceeded to bake all day long which is ironic considering how cold it was at night. Usually your Dad would make breakfast and I would feed Oliver and hold him since there was no place to put him down. After taking turns holding Oliver while we all sat in our seats in the car eating oatmeal off the hotplate, your Dad would start off on house projects for the day and I would try to keep you all alive and happy till dinner. Unfortunately, since we’re all Pacific North West’ers, our sun tolerance is about 20 minutes a day before you kids started showing signs of overexposure. This meant that I had to keep you safe either playing in a shady patch on the driveway or sitting in the van with the A/C running during a snack time. In between all the many toilet breaks, (so many times…so many times) and feeding you snacks of fruit or PB&J, and drinking water, and washing hands at the well faucet, and more toilet trips because maybe you didn’t quite get the job done the first time since you were distracted by the view, in all of this, I am holding my dear sweet Oliver. Notice I didn’t say my dear LITTLE sweet Oliver, because there is nothing little about you. Weighing in around 25 pounds, holding you can best be compared to wrestling with a short, fat anaconda. By the time the evening started to roll around I would invariably either give up and feed you beef jerky and a banana for dinner or if I was feeling ambitious and your Dad was cleaned up in time to hold Oliver we would heat up some of the chili or chicken soup from the crockpot and once again eat in the car. There was this window of time between 7ish and 8:30 where the campsite would not be in the blazing sun. In this window, we would eat dinner andyou kids would play in the dirt left over from the well drilling process while I worked on the next day’s meal and clean up the campsite.

Night always came on fast though and suddenly. One minute the sky would be a giant whirling dervish of barn swallows during dusk feeding, and the next minute the sun would slink down the treeline taking all the heat with it.  All of a sudden, we’d be bundling up in our nighttime layers and listening to the crickets wake up.  Kids, you won’t ever understand this since you’re probably pretty comfortable sleeping in the great outdoors by now, but i’ll just admit here that your mother hasn’t been camping with so much wildlife around in a very long long long time.  After our dear, sweet, neighbors regaled us with tales of all the wild predators that they had seen around lately, I made your father take some extra precautions to stop the laying-awake-in-the-middle-of-the-night-listening-to-creatures-moving-in-the-tall-grass and in spite of my dry-mouthed fear, planning how I was going to detail this imminent confrontation in a blog post called The Naked Prey. Not that we sleep na–it’s a metaphor, okay?